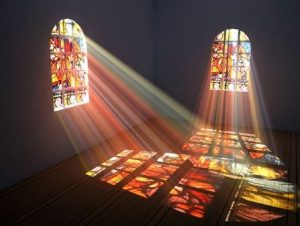 Did you know there are people who professionally study glass? Take John Mauro, for instance. He’s a researcher at Penn State who is interested in the physics and chemistry of glassy materials like stained glass windows. He decided to investigate 13th-century glass in order to dispel a longstanding myth that cathedral glass is thicker at the bottom due to glass viscosity. Say what, now?

Well, the myth assumed that glass would make a slow transition to liquid over time. So therefore the people who made stained glass for cathedral windows would most likely make them thicker at their bottoms so they’d last longer– or something like that. Mauro wanted to consider the science behind stained glass, and found that previous research was “off” by 16 orders of magnitude. Lost yet?

Here’s the deal: Those old windows are transitioning to a liquid state faster than previously thought. Does that mean they’ll liquify anytime soon? No. It’ll still take BILLIONS of years for the shape of the glass to change due to nano-sized structural changes. But Mauro and other researchers did learn some interesting things about stained glass.

Basically, glass has a hybrid nature that’s both liquid and solid, right down to its atomic structure. It also exhibits “viscous slow” like a liquid, but responds, mechanically, as a solid material.

Mauro’s interest in medieval glass stems from studying “Gorilla Glass,” which is found in billions of electronic devices. With Gorilla Glass, it was found to shrink measurably when below its transition temperature. Its viscosity was measured to discover that it is many orders of magnitude less than what had been previously known for medieval cathedral glass. That lead to the scientific query: were the previous estimates of viscosity for cathedral glass artificially high? The result? Yes!

So while you enjoy looking at stained glass creations, marveling at their beauty, realize there’s science behind them– things you can’t see with the naked eye, existing, and, sometimes, changing over time. Remember, it will take billions of years before stained glass transitions to liquid form, so you should be fine for now. Cumberland Stained Glass can design, restore and repair stained glass— please call 717-691-8290 with inquiries.