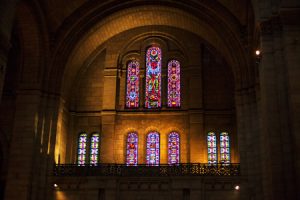 Specifically, stained glass windows (as we know them) got their start in the world in medieval Europe. Church cathedrals incorporated stained glass windows into their bold designs, which included sky-high ceilings, flying buttresses, and rose windows– the kind of churches people still take tours of, even centuries later! Imagine these classic structures without stained glass– they just wouldn’t be the same, right? Indeed, stained glass became an integral part of many churches built from the 1100s onward. Not only were they works of art, but they could also be used to tell stories to the people who saw them. For hundreds of years a majority of the population in Europe was illiterate. However, stained glass windows depicted Biblical stories in such a way that even illiterate people could understand what was going on in the scenes in the windows. They’d see Jesus feeding people, walking on water, being nailed to a cross, and more. Their minds would be filled with all sorts of heavenly images, including cherubic angels. Meanwhile, when sunlight shone through stained glass, it filled these church interiors with jewel-like color– something totally out of the ordinary for those in attendance. After all, most people were poor peasants, coming from fairly rundown, poorly-lit homes. They’d walk into these grand edifices and feel an overwhelming sense of who God was/is. They’d be thoroughly impressed, as these churches were their version of a mansion– taste of heaven perhaps.

While stained glass probably first appeared in ancient Roman times, it wasn’t until medieval times, in the 1100s, for instance, that these types of windows were “perfected.” During the “Middle Ages,” colored glass was assembled in patterns and fitted between soldered strips of lead. Whether geometric in design, or hand-painted with artistic stories, religious imagery came to life, lit up by natural light from the daytime sun. These were breathtakingly beautiful artistic achievements– the kind of art a community could be (and should be) proud of– a highlight of a town, village or city. People would travel for days just to see new stained glass windows– to witness their awesome beauty and color in person. And even hundreds of years later, by the way, stained glass windows are still impressing the people who see them, long after their makers have passed away. Stained glass windows have staying power. Go to Europe and take a tour– chances are the tour will include a visit to the local church to see its windows.

The Transition to Residences 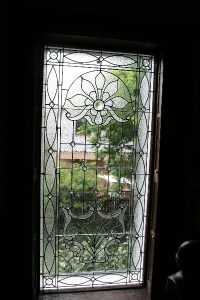 In Europe, it was mostly the Catholic Church who could afford elaborate stained glass windows– for hundreds of years. Around the late 19th Century, though, stained glass became a bit more affordable and/or laypeople became a bit more wealthy. And then what happened? Stained glass windows began to appear in rich people’s homes, as a way to show off their wealth. Pretty soon, designers started incorporating stained glass into other things besides windows, including such things as lampshades. Rich people of the time, like the Astors and Vanderbilts, just had to have “Tiffany”-brand lampshades in their mansions! And the lower class could buy cheaper imitations.

Some famous artists from fairly recent times (whom you probably heard of) ended up working with stained glass, too, including Piet Mondrian, Marc Chagall, and Henri Matisse. As an artform, stained glass has thrived.

So why have stained glass windows (and stained glass art pieces, etc.) been truly popular for centuries? It’s because they help bring beauty indoors. They tell stories. They distract people from the mundanity of everyday life. And, above all, they remind us of the beauty of God’s creation– the world, its people, and the promise of eternal life as told in the Gospels.

Also, take a look at some of our work with religious stained glass here.