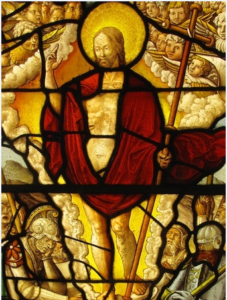 Stained glass windows have fascinated many people over the centuries. Not only are they colorfully beautiful, especially when the sun shines through them, but they also have the ability to communicate messages and stories to people long after they’re initially placed in a building.

Did you know that stained glass windows were, for many years, referred to as “the poor man’s Bible?” That’s because people, especially during the Middle Ages, were mostly illiterate and relied on their local priest to tell them stories of faith since he could read and had a Bible. To further communicate the life and death and resurrection of Jesus, Biblical scenes created by artists were put into stained glass windows so that even the poorest of the poor could “see” the Gospel in action. So, for instance, if no priest was around to share the Good News, but a person wandered into the church and looked at the windows, he or she would clearly see the life of Jesus as depicted in the various windows.

While we may think of schools as the main place of learning these days, during the Middle Ages people considered the church to be a place of learning. Therefore, its windows were used to communicate Christian beliefs to all who saw them.

Eventually stained glass windows were also used to pay tribute to saints, kings and wealthy donors who had the money and inclination to pay for stained glass windows. That’s why you’re likely to see not only Biblical scenes represented in grand, old Gothic churches, but also graphic depictions of specific people other than Jesus.

Stained glass windows of the Middle Ages came about when an artisan would first draw a picture the same size as the proposed window. Then he– and it was typically a man– would number different sections the way you’d make a puzzle, paying attention to colors he’d use. He’d place pieces of colored glass over his drawing and eventually cut shapes using a hot iron. Finally, he’d end up using lead strips to hold the pieces of glass together.