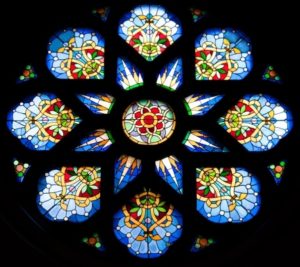 The first confirmed man-made glass was in Egypt as glass beaded jewelry. It was however the Romans who perfected the art of creating small colored glass items.

Archeologists found Romans manufacture stained glass for more than just beads. Stained glass inception was designed initially for Roman Catholic churches, first in Rome and then throughout all of Europe subsequent to the influence of the Holy Roman Empire.

Stained glass was among the first art form trends and skilled worker industry. In the following decades and centuries, this craft spread throughout the world and become a widely manufactured element of design. From homes to businesses to churches, stained glass brought personality, intrigue and a story to each building.

From the first century when the Holy Roman Empire rose to power right up until the 18th century, the influence of the Catholic Church was more than apparent in every aspect of society. Aesthetically, this was most obvious with presence of stained glass in architecture. Appreciation for the craftsmanship dissipated throughout the Industrial Era, but is making a roaring comeback in contemporary 21st century design.