When did stained glass windows “become a thing?” It was about the 10th century when they were first developed. Before that, Egyptians and Romans would create small colored glass objects, but not large scale windows. During the 10th, 11th and 12th centuries, however, Europe saw the construction of many church buildings– grand edifices that would become landmarks in their respective towns and cities. And church leaders at the time were dealing with a mostly illiterate population. Since most of the people couldn’t read and write, stained glass windows were put into the “new” church buildings to help tell Bible stories to the laity. These windows served as theological teachers, showing highlights of scripture, from the books of the Bible, from Genesis to Revelation.

Basically, stained glass windows developed as a theologically important art form– a way to convey to the masses things the church wanted them to see, think about, and understand, including Christ’s death on the cross, His resurrection and then some.

Also depicted in the artistic scenes of stained glass windows of the time were various Saints. They were there to inspire people struggling in their own Christian journeys. “If Saint So-and-So could endure such-and-such, then so could I,” was the thought.

Technology allowed stained glass windows to become more complicated, full of all sorts of symbolism. Churches became very proud of their windows, which were often the last thing installed in a new church. These windows were expensive to make and install, such that churches often raised funds from local donors, putting the names of patrons on the bottom of the window or windows they essentially sponsored.

Perhaps one of the main reasons stained glass windows “caught on” during the 10th, 11th and 12th centuries had to do with changing architectural styles. For quite some time, the Romanesque style prevailed. These buildings could best be described as “heavy” in their style. Inside, their space was separated by thick walls into units. Outside, they conveyed strength with their thick stone walls and relatively small openings. Indeed, they’d have narrow doors and small windows. But then came along Gothic architecture, which allowed for open space inside (eliminating the need for interior walls) and larger, wider windows. Stained glass was a “perfect fit” for the “new” Gothic-style churches. That’s not to say that Romanesque churches couldn’t have stained glass windows, but Gothic, in general, just lent itself better to the utilization of stained glass. 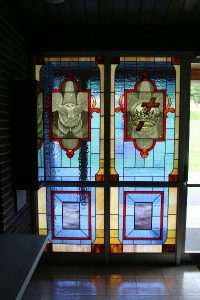 Because Gothic architectural features meshed well with the need for stained glass windows, artists were in demand to blow the glass into various forms and sizes to fill the spaces. Pieces would be “painted” to help show details on clothing as well as hand gestures and such. Then there was the task of placing intricate windows into frames and actually installing them in church buildings– it became a career to do this sort of work, rather than just a hobby.

The Significance of Stained Glass Windows and Light

What’s the significance of stained glass windows and light? Well, the way light goes through stained glass often has an enchanting effect on the people and spaces below… for instance, if there was a rose-style window with pretty colors like soft pinks and reds, and the light from outside would shine through at different angles during the day, then people in the church would be fascinated by the designs and colors shining inside the church in various places at various times. Oftentimes, colorful windows would be referred to as the church’s “windows to the heavens.” Windows also helped to naturally light the interior of each church. 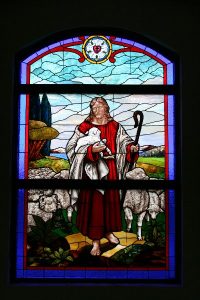 While beauty played an important part in the existence of stained glass windows in churches over the centuries, the more practical, functional reason they became popular was to help point people to God through their Biblical scenes and ideas. Rather than just being mere decorations, these windows had spiritual significance– they were used as tools to teach people about God, about faith and about “the church.” Stained glass helped to embed religious ideals literally into the walls of churches!

In general, you’re more likely to see stained glass windows in Roman Catholic churches than Protestant churches, which do not favor the use of “images” in their buildings… but that’s a whole different subject that’s not covered in this blog posting. That said, some Protestant churches, especially the ones closest to Roman Catholicism, such as Anglican/Episcopalian, utilize detailed stained glass windows.

To sum it up, stained glass windows are omnipresent in churches because they’re used to depict Biblical individuals, groups of people, stories, and/or moralizing images. Churchgoers can “use” them to contemplate their faith and apply what they see to their everyday lives.

Whether you stained new religious stained glass windows for churches, or you need current ones repaired, restored or protected to help extend their longevity, the experts at Cumberland Stained Glass, Inc. are here to help. Contact us today to learn more.